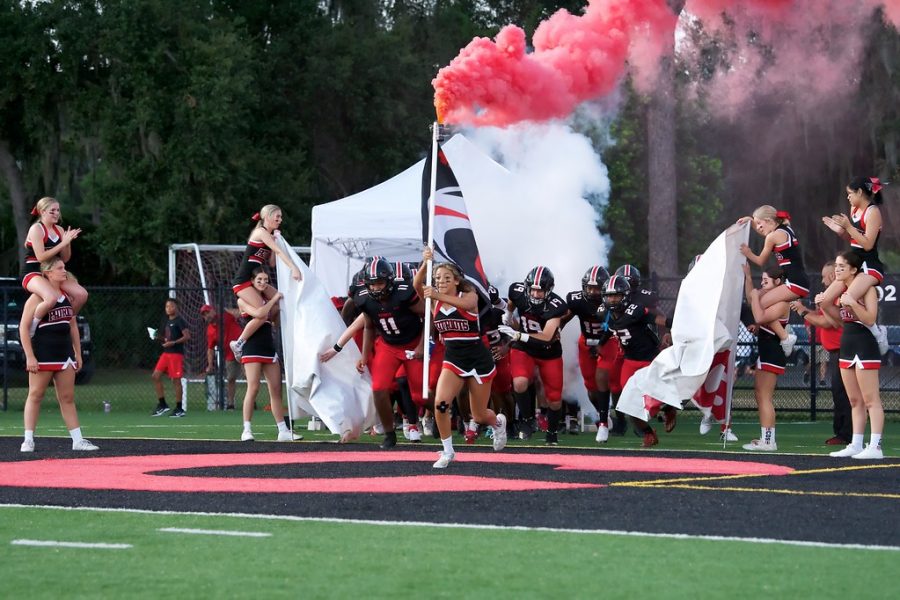 This homecoming game brought a huge audience to the school Friday night. The stands were full of parents, teachers, and peers for the CDS Patriots and the Cambridge Lancers. CDS alumni even showed up to the game to show their support. Everyone was riled up in spirit, especially the cheerleaders — but no group could have been more excited for the game then CDS’s very own spirit group, Red Reign. They bled red, white, and black for the Patriots on Homecoming night. With help from Red Reign, the homecoming game was a huge success.

Homecoming court was also featured in this time-honored tradition. Each year students from each grade nominate their peers, 3 boys and 3 girls, to be Dukes, Duchesses, Princes, Princesses, King and Queen. This year’s homecoming King and Queen were Aryan Banerjee and Rashmika Brahman. This was a sweet moment to showcase what it’s like to be a CDS Patriot and how we want the students to represent our school. Afterward, the CDS football team was ready to go out and play the game.

To help you visualize our team’s chances against Cambridge’s, a list of each team’s stats previous to the outcome of this game have been listed. Cambridge Christian’s stats are very impressive; their total rushing yards are 882, receiving yards are 198, passing yards are 248, total yards per game are 226 and their yards in total is 1130. Cambridge Christian has an overall 1-5 with 1 win and 5 losses, leaving them with a 0.17 win percentage. They are overall 8th in their 2A Region 3 standings.

The CDS Patriots stats are even more impressive compared to the Cambridge Christian’s; their total rushing yards are 1137, passing yards are 1302, receiving yards are 1291, total yards per game are 348.4 and their yards in total are 2439. The CDS Patriots also have an overall 5-2 with 5 wins and 2 losses, leaving them with a 0.71 win percentage. They are overall 2nd in their 3A Region 3 standings.

The CDS Patriots had not been able to beat Cambridge in almost three years — everyone was anxiously awaiting the start of the game to hope that this year CDS would finally prevail. Our Patriots played an amazing game and should be very proud of themselves for all that they were able to accomplish within those very brief 90 minutes.

The CDS Patriots won the game and defeated Cambridge with a final score of 42-7. Happy Homecoming Patriot Nation!